Lifetime supply of ‘best stuff in the world’ keeps Bluett Bros. Violins at top of the game

Some of the finest stringed instruments in the world are made inside a modest shop on Hill Street, just outside York city limits.

That's where you'll find Bluett Bros. Violins. Owner and master luthier Mark Bluett has been making violins, violas, cellos, mandolins and more for upward of 30 years. Every instrument is expertly crafted, with Bluett's years of experience as an artisan and musician evident in each creation.

Perhaps nothing is more illustrative of the care that goes into each product than the materials that comprise each violin. Bluett recently took some time to talk to us about how he sources the wood and other components for his products - and it's incredible to learn that the stories of his instruments actual trace back decades.

Six years ago, master luthier Mark Bluett had an opportunity to buy a load of Italian spruce. It had been air-drying since 1967, the same year the Green Bay Packers defeated the Kansas City Chiefs in the very first Super Bowl and a time when a house could be bought for $14,000. That means come January, the wood will be 50 years old.

Bluett called it the "best stuff in the world." And when it comes down to it, the materials matter for an instrument like the violin.

"It's like making the perfect wooden speaker," Bluett said. "The top makes most of the vibration, which gets conducted through the bridge and through the strings. Then the hardwood back inside - like speakers - throws the sound out. That's why a violin, a pretty small instrument, is a pretty loud instrument." 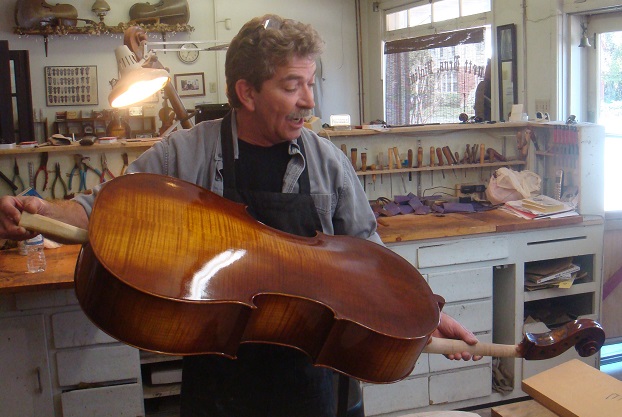 The Italian spruce mostly makes up the top of his violins. It's a resonant wood, one of the strongest length-wise but one of the softest sideways, Bluett said.

It's curly maple for the backside and necks of violins, violas and cellos. That comes from Oregon, and it's been aged about 20 years, Bluett said.

Wood only needs to be dried about 10 or 20 years, enough time for the cells to crystalize and avert warping. Now that wood in Bluett's stockpiles has been set, it's not moving.

Fingerboards are made from ebony from Africa. It's a dense wood, meaning strings won't wear grooves in it over time, Bluett said. Plus, it polishes nicely.

The pegs, chin rest and tail piece are either ebony, rosewood or European boxwood. All are fairly dense.

Even the bows are made with some of the best fibers in the world.

"I usually get either the Siberian white or Mongolian white horsehair that's some of the best in the world," Bluett said. "The blonder your hair is, the finer your hair is. When the follicles are fine it makes a clean note."

Given the expert craftsmanship and the quality of the materialists, it's no surprise that Bluett's instruments come with a lifetime guarantee. 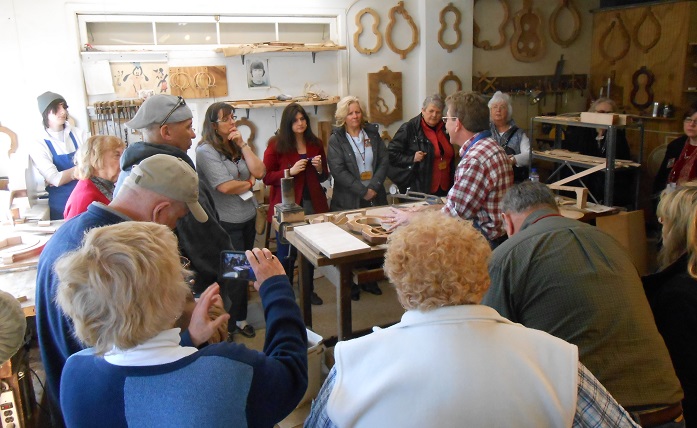 Anyone interested in learning more about Bluett Bros. can schedule a tour. The shop is one of the hidden gems of York County, the Factory Tour Capital of the World. It's a must-see stop during the annual Made in America Tours Event every June.

But with enough Italian spruce on hand to last Bluett a lifetime, you're sure to see amazing instruments any time you visit.

We're Explore York, the Official Tourist Promotion Agency for York County, PA! We're happy to help you plan your getaway to York County. Stop in one of our Visitor Information Centers and talk with one of our travel counselors or call 1-888-858-YORK.